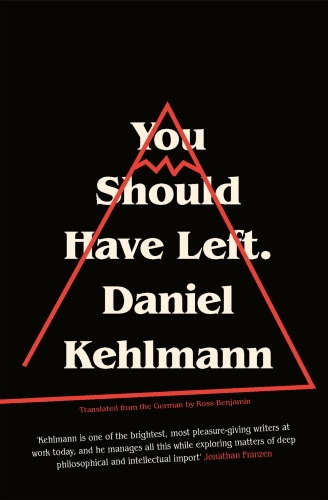 You Should Have Left

A thrilling exploration of psychological disturbance and fear from the bestselling and prize-winning author of Measuring the World.
On retreat in the wintry Alps with his family, a writer is optimistic about completing the sequel to his breakthrough film. Nothing to disturb him except the wind whispering around their glassy house. The perfect place to focus. Intruding on that peace of mind, the demands of his four-year-old daughter splinter open long-simmering arguments with his wife. I love her, he writes in the notebook intended for his script. Why do we fight all the time?Guilt and expectation strain at his concentration, and strain, too, at the walls of the house. They warp under his watch; at night, looking through the window, he sees impossible reflections on the snow outside.Then the words start to appear in his notebook; the words he didn't write.Familiar and forbidding by turns, this is an electrifying experiment in form by one of Europe's boldest writers. The ordinary struggles of a marriage transform, in Kehlmann's hands, into a twisted fable that stays darkly in the mind.